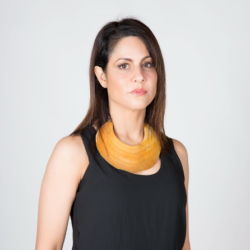 Ada Trillo is a documentary photographer born in Paso, Texas and based in Philadelphia, Pennsylvania, and Ciudad Juárez, Mexico.

Trillo holds degrees from the “Istituto Marangoni” in Milan and Drexel University in Philadelphia. Trillo’s work addresses the human rights issues facing Latin American culture. has exhibited internationally at Saint Joseph’s University in Philadelphia, “The Photo Meetings” in Luxembourg, “The Passion for Freedom” Art Festival in London, “Festival Internazionale di Fotografia” in Cortona Italy and at the Anya and Andrew Shiva Gallery in the John Jay College of New York.

In 2017, Trillo received an Art and Change grant from the Leeway Foundation. Her work has been featured in The British Journal of Photography, The Guardian, and Smithsonian Magazine.

Q: What is the most dangerous situation you have ever had to work in?

Ada Trillo: When I rode the train La Bestia (“The Beast”). The freight train runs from North Guatemala to the United States. Though it is not intended to be boarded by passengers, thousands of Central American migrants climb atop of it as they travel to the U.S. Travelers strapped themselves outside of the vehicle by looping their belts onto structured beams. The goal is to not be knocked off–because that could cause fatal injury or death.

In addition to the obvious danger, the train officials tend to be corrupt. One of them tried to harm me during this journey.

Q: What is the most difficult feeling to capture in a photo?

Ada Trillo: Happiness is rather easy, and I feel that sadness is as well. I think capturing a portrait of Hope and Loss of Hope is the most difficult.  It is a challenge to properly capture and express the moment people feel defeated. Also, hunger is especially difficult. People are not as transparent when they are hungry– even when they are starving. Malnutrition is external, and easy to see, but hunger is a feeling. Only when I was in the shelter for a few days could I properly witness the change it makes in people.

Q: Are there any prizes you would still like to win?

Ada Trillo: A Guggenheim, for sure. I like to envision the projects I’d explore after winning one.

Q: Describe a real-life situation that has inspired you.

Ada Trillo:  My nanny, Puala Amapaula, was an inspiration to me. As a teenager, I traveled between the two cities to attend school in the States. A migrant woman raised me. After her deportation to Mexico, my parents hired her as a nanny and maid when I was four years old. She was motherly; I suffered from social anxiety and had no friends, so she played with me. Unfortunately, her death followed my high school graduation. I never had the opportunity to express thanks for her love and influence. She is the inspiration for my Migrant work.

Q: What would you say to someone starting out in the world of photography?

Never be afraid to seek out mentors, they are extremely important. In this field, I have noticed, there are always people who want to help you. Artists advocate for other artists; Accept this blessing.  Even if you don’t know them well, being connected will always come in handy.

Q: Tell us about a pivotal moment that really launched your photography career.

Ada Trillo:  When Donald Trump first began to run for office, he began to speak down on Central/South American people and their experiences. I wanted to use my art as an outlet to combat his demeaning conversation. My portraits are meant to maintain the dignity and truth of my subjects. Their stories are the antithesis of what Trump said, and I’d like for my audience to see the people as they are–in their condition and perspective.

Q: What one photograph left a lasting impression on you and why?

Ada Trillo: La Princessca–it reminds me to stay hopeful. The hope and resilience that children have is amazing. This portrait is a reminder to remain hopeful as I grow older. Society and everyday grievances can quickly steal your joy; but we must not lose it.

She had horrible living situations while in a migrant caravan; she was so happy to get the dress. It is a reminder to always remember and appreciate happiness.

Q: How do you earn your subject’s trust to be photographed?

Ada Trillo: I gain their trust because I live with them. You always ask permission to take someone’s photograph–and do it with an enormous amount of respect. So that they know you are genuine and you’re advocating for them. And if they say no, put the camera down and still say “thank-you”.

Q: Any specific city where you would like to have a studio? Why?

Ada Trillo: Oaxaca México, has a beautiful multi-cultural identity. I’d love to be surrounded by the various ethnic groups. It is filled with artists and is such a lively city.  I’ve seen residency programs and it seems like the place I’d be happiest.

Ada’s “Migrant Caravan” exhibit presents an insight into the lives, struggles and strengths of Central American migrants. His photos are surprising in the sense that they have managed to capture the different emotions of the migrants on their journey, and that, despite the difficulties, joy can still be present in those circumstances.