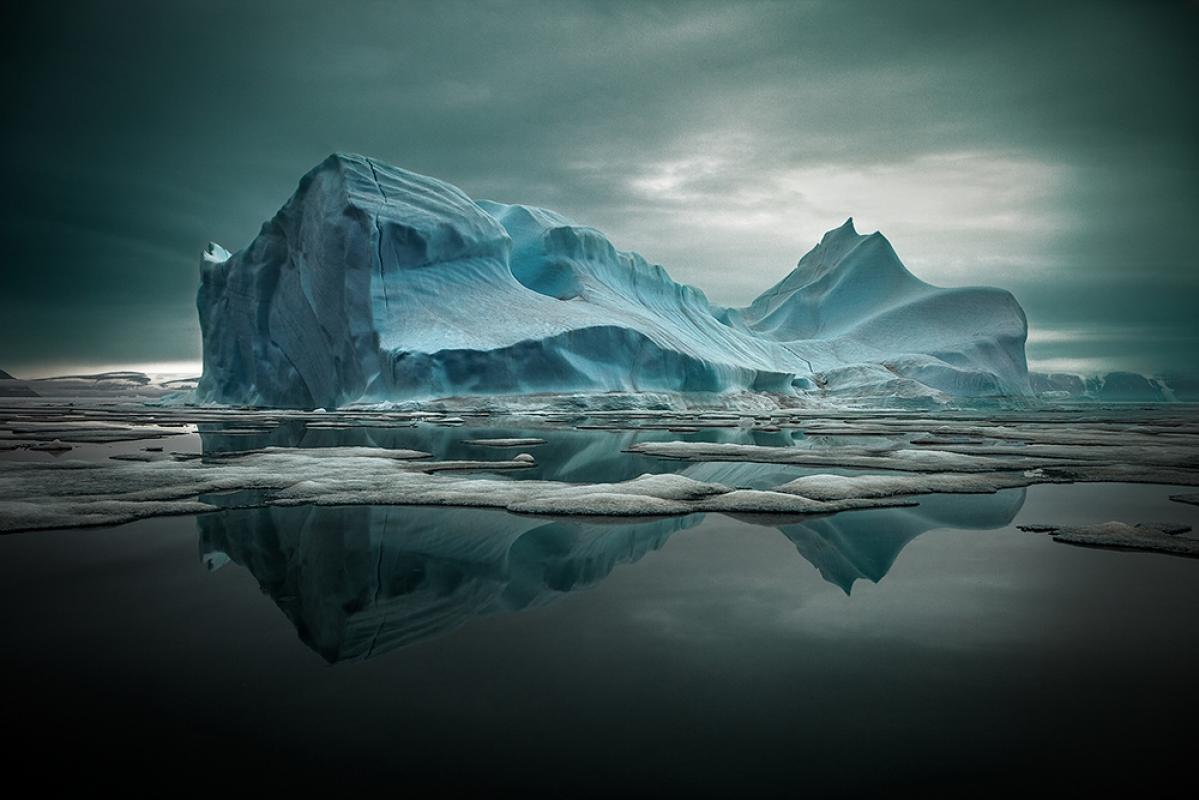 What motivated you in your exploration of the earth’s shrinking ice caps?

I am very lucky that my work today allows me to combine my greater skills and passions. Luck and design have conspired to solve that age-old quest purpose for me. Like a Rubik’s cube coming together: I was trained as a professional photographer and worked commercially for years before focusing exclusively on the ice; I have been an athlete my entire life, and an adrenaline seeker. So, sports have always been a necessary part of my day. I was enamoured with exploration and mountaineering from books when I was a kid. Curiosity has been my best ally, and photography my weapon. The places I choose to travel are so antagonistic to human life and so exotic that anything you bring back will be interesting. To learn about the regions was a no-brainer. Given its direct impact on the ice, climate change is a constant travelling companion. I am fond to say that he who travels the land will soon become an advocate in its defence.  That became my passion.

What are the physical challenges as well as interesting encounters in the frozen regions?

I think falling through the ice in -35c  weather is perhaps the most frightening, but it happens so fast that the fear is mostly lived in retrospect. Being charged by a large aggressive predator whose intention is to kill and eat you is one that seems to happen in slow motion. Imagining what could happen with close-up bear encounters sometimes gives me shivers in the middle of the night. But getting pinned down in hurricane strength winds for multiple days as I was in the Southern Greenland ice sheet made me feel really insignificant: one mistake can make the difference between life and death.

Can you share with us your overall experience as a photographer, climate advocate and an explorer?

No place makes you feel more alone and vulnerable than being a speck of nothing on an endless canvas of frigid white! That is both the simple beauty and oppressive daily reality of a long trip. Days are usually defined by cold or colder. And occasionally there is colder with no visibility and high wind! Those are the worst. Ultimately, the privilege of being in a place that more often than not has never seen a human footprint is worth the price of admission. It’s a place of deep introspection. What I especially like about the ice is how clean and sparse it is, free from the visual pollution of human interference, but also empty—like a blank canvas, void of the confusion of organic life. As a photographer, I am especially drawn to that.   I love deserts, but the ice has the unique advantage of providing boundless amounts of water that need not be carried but simply melted. Visually and philosophically, a white canvas invites creative interpretation and reflection.

Harsh environments help recalibrate our place in the natural order. Outside the convenience of urban centres, nature has a straightforward way of catching up to us. On the ice, trash sticks out like a stain on a canvas; there are no places to hide: everything is raw and exposed, especially how vulnerable we really are. We have created asylums for ourselves in cities but individually, we are out of touch with a relationship that sustained us for millennia. Humans traditionally were close to nature and respectful of its harvest. Today, we manipulate that relationship, and the burden is on us, though we have not yet figured that out. That lesson is coming, and it will be painful. The ice, more than anything, humbles you. It also narrows needs down to a practical minimum: in the end, we can get away with very little to be happy. That lesson is the first to come from the ice.

Take us back to the time you discovered your passion for photography.

I took my first shots on a safari in South Africa in the 70’s when I was 12. My grandfather lived there, and after being a big game hunter in the earlier life, he traded his gun for a camera by midlife and never killed an animal again. I graduated from the plastic Kodak camera to the Olympus OM-2 which I stole from my mother. She replaced her camera with a Nikon F3, which I proceeded to adopt as well. And I shot everything, with one lens only: the 24mm. Eventually, I evolved to 6X7 Mamiyas and then Linhof view camera. Working for the commercial establishment was a great training ground and gave me a lot of professional validation. But there was a dimension missing and after almost 20 years of commercial work, I had to move on.

What kind of photography do you identify with?

I like to say that there are only two kinds of photography: good and bad. Not surprisingly, I identify with the former! A photograph is a statement designed to stir an emotion. In today’s welcomed democratization of image taking, however, it is important to separate an image from a photograph. The lines can easily be blurred with all types of personal standards and quality filters. But I think ultimately, the goal remains the same: to capture the viewer’s imagination and make an impact. If it achieves that, it succeeded in that mission.

What is the story behind your winning TIFA entry?

The experience of photographing icebergs is defined by the temporary state of those shapes.  They provide an abstract natural sculpture for a limited window of time, making each image entirely unique. Fine art photography loves black and white, but the reduced colour spectrum and muted tones of blues and greens offer an alternative that remains close to that monochromatic tradition.  Shooting them in spring or summer can provide incredible reflections from the surrounding water whose density and mass make it less susceptible to rippling and wind disturbance. In a sense, icebergs feel like live creatures in their final days. Photographing them is a testament to their existence.

What would you say is your most memorable photo to date?

I am lucky to have had the privilege to travel and photograph some very exotic locations where the natural barrier has prevented excessive traffic and therefore less visual records. In addition, the fleeting nature which defines most ice structures makes many of those photographs less likely to be replicated—unlike, say, more iconic locations. As with all nature photographs, they require patience and a lot of shoe rubber; I, therefore, identify with a lot of images relative to the effort they required to be captured. But to identify one, in particular, is like trying to pick a favourite out of your children. Exceptionalism is not a healthy approach to family management! With that said, there is one that moves me particularly these days. It is a portrait of my late friend, explorer Henry Worsley. We had met by happenstance at the geographic South Pole on a pit stop from separate expeditions. Henry’s admiration of Sir Shackleton led him to Antarctica multiple times, and he asked me if I would shoot him in the manner of his hero. He had the goggles and balaclava to lend the right touch but the 68 days he had just spent on the ice was all the authenticity required. I treated the image in the way a camera image of the early 1900’s would look. It was his favourite image. Henry would die on an expedition four years later trying to complete the trip that Shackleton never did. The shot has been used in various pieces about Henry, notably in the Newyorker. It was a moment in time of my friend that I especially cherish.

Please share your packing essentials for a day in the field.

I rarely go for just one day, and this distinction is essential in my choice of gear, specifically as it relates to weight. Weight, of course, always defines a travel or nature photographer’s choices, but when pack weight makes you consider cutting the handle off a toothbrush to save a few grams the conversation takes on a different dimension! Gone, for me, are the days of prime lenses and medium or large format, sadly. That was and still remains, a personal favourite and it was my photographic education. But when travelling in sub-sub-zero conditions, this kind of equipment is not just a luxury: it’s a liability. Luckily, technology is at the service of efficiency and the standards of excellence are almost reaching parity with my old gear. Almost. Sentimentalism aside, I am all about streamlining: I’ll take two bodies (I’m on Canon so these are Mk3&4’s); three zooms 16-35; 24-70 and 100-400. And a lot of batteries if I cannot rely on solar charge.

What kind of equipment do you use now, and what did you start with?

Aside from my very early days of photography, I only shot medium and large format. That was until I experienced bringing the wrong equipment on the ice. In the field, I now shoot mostly with Canon (Mk3&4) and three zooms. Equipment needs to be weather-proof and can capture large files. I learned that from trying my hand at larger format son earlier trips, the results were great but hard earned, both on the equipment and the work. It gives me even greater respect for the pioneers: Frank Hurley, Herbert Ponting, George Lowe… on the ice, in extremely cold environments, the simplest tasks that deviate from just travelling take on a dimension that would seem insignificant anywhere else. But everything there is more complicated. Equipment protocols are the greatest challenge. Batteries cannot sustain the cold so they are stored close to the body for warmth. To get a shot means stopping; opening the sledge to find a camera and appropriate lens; removing gloves to locate battery; inserting it into the camera, and repeating that process backwards once the shot is taken. All that needs to happen fast as the large mitts come off to handle the equipment and fingers get very cold very quickly, and risk frostbite. Besides, to prevent overheat and sweat from pulling a heavy sledge, clothing is surprisingly light which means the body is cold when stopping. Photographing guarantees getting cold, as putting on a warm jacket would mean removing the harness which would slow things even further! Finally, shooting has its challenges: the heat from the eyelids would fog the eyepiece and instantly freeze it. That entails a “ballpark” approach to framing, which is anathema to photographers, naturally. Multiple attempts are required to bracket a frame. 35mm lends itself well to that.

What is your advice to emerging photographers?

Shoot a lot, and shoot everything. As mentioned earlier, there are only two genres of images: good and bad. Don’t pigeon-hole yourself; let art directors and clients do that when you present your targeted portfolio (don’t show everything, that is just for you to learn who you are). Be curious, inquisitive, but not overbearing. A photographer is a predator—a hunter of images. Like hunters, you want to get as close to your subject as possible, but not so close that you would scare it away.

You won’t know your style until you shoot a lot of frames. Luckily, digital has made the task much easier. Finally, don’t shoot for the web, even if that is where your image is most likely to end up in these times. Learn to print, just so that you can see the beauty of a printed image and the extra work required to get there. Finally, photography, like music and literature is an art form that takes a lifetime to master. Keep at it, and don’t get either too high or too low on yourself: you will be judged not by one image or a series, but by a body of work spanning decades.